Two men were descending upper Red Pine Chute shortly after 11 am when they triggered an avalanche. The slope had been extensive controlled the day before, and had a few tracks on it including some from the snow safety team. One man was caught, carried a ways, and ended up on top. The other man was caught, hit a tree in the lower track, and died of head trauma. A man and a child below were engulfed, with the man partially buried, and the child totally buried. A call was placed from on site to 911, and the sheriffs notified Canyons ski patrol. The father was able to dig himself out while his son remained completely buried. The ski patrol arrived and preformed an outstanding rescue. They set up a probe line using volunteers on the scene. Within minutes, there was a strike by a 15 year old girl that was on the probe line that the snow safety had organized, and the boy was excavated from the debris with no pulse or respirations. CPR was begun immediately, and the boy was breathing on his own by the time he was loaded into the air ambulance. Response was impressively fast. He was taken to a Salt Lake hospital, where he remains under care as of 12/24/07. 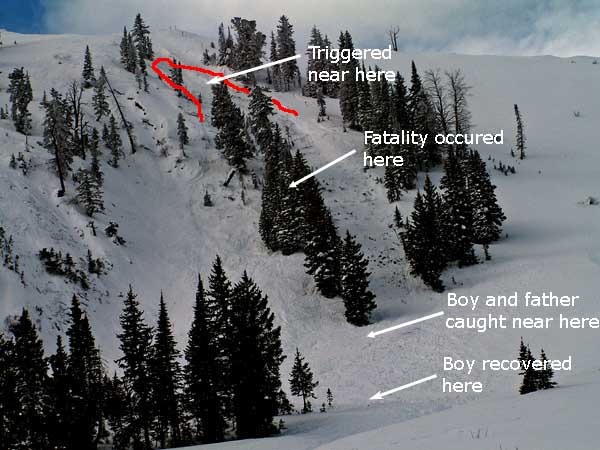 A man was killed and a boy critically injured Sunday morning when an avalanche swept over them while they skied within the bounds of The Canyons Resort. It was the first death of the avalanche season. The skiers were in the Red Pine Chutes area when the avalanche began just after 11:15 a.m., said resort spokeswoman Elizabeth Dowd. The man - 25 to 35 years old and possibly a Colorado resident - was found about 10 minutes later, but died at the scene, she said. A friend of the man suffered minor injuries. The 11-year-old was skiing at the bottom of the double black-diamond run with his father when he was caught up in the slide, Summit County sheriff's Capt. Andrew Leatham said. Three women witnessed the avalanche; one found the boy about 30 minutes later with her ski pole. Rescuers performed CPR, and the boy was flown to Primary Children's Medical Center, Leatham said. As of late Sunday afternoon, the boy was in intensive care and doctors were warming his core temperature, he said. The slide occurred within resort boundaries, in an area that had opened Saturday, Dowd said. Explosives, a snow pack assessment and a test ski had been administered at the avalanche site less than a day before the slide, she said. "Aggressive avalanche control work had been performed at The Canyons throughout the week as new snow fell," she said. Investigators didn't know what triggered the slide, which was 125 feet wide and 500 feet long. The depth ranged from 3 inches to 5 feet. Avalanche deaths are "very rare" in ski resorts, said Brett Kobernik, forecaster for the Utah Avalanche Center. "It's only happened a handful of times since the resorts have opened here," he said. The avalanche danger in the area Sunday was considerable, according to the center, which warned that dangerous human-triggered slides were likely. The risk was expected to remain today, Kobernik said. "The avalanche danger will be on the rise again on the back country . . . due to more snow and stronger winds," he said.

Man killed, boy injured in avalanche at The Canyons

An avalanche at The Canyons resort in Park City left one man dead and a juvenile critically injured late Sunday morning.

The avalanche at the ski resort occurred at 11:17 a.m., according to the Summit County Sheriff's Office. Skiers who saw the crash and Canyons ski patrol teams were on the scene within minutes. Sheriff's deputies also were called to the area of the slide.

Eight minutes after the avalanche, the body of a man between the ages of 25 and 30 was found. Paramedics immediately began attempting resuscitation, but he was pronounced dead at the scene.

Twenty-five minutes after the first man was found, an adolescent boy was discovered and pulled from the snow and ice. He was unconscious but later was revived and taken to a Salt Lake area hospital, said Summit County Sheriff Dave Edmunds. Sunday night he was reported in critical but stable condition.

Neither the identity nor the hometown of either person was released Sunday evening, pending family notification, Edmunds said. Police did not believe Sunday that the two had any relation to one another.

The man and boy were found within bounds near the Red Pine Chutes area, according to The Canyons spokeswoman Elizabeth Dowd. Officials are unsure whether the avalanche, which they called of substantial size, started within bounds.

The Canyons has participated in aggressive avalanche control in the area of Sunday's slide, Dowd said. Explosives and other safety measures were performed within 24 hours of the fatal avalanche.

However, the Utah Avalanche Center has listed slide danger in the area of the western Uintas as considerable. The center does not list specific data for The Canyons on its Web site at www.avalanche.org.

Sunday's fatal slide caused The Canyons resort's second death within just eight days. On Dec. 17, a Park City attorney died after striking a tree and breaking his neck near the Lower Crowning Glory run at the resort.

So far in winter 2007, Utah has seen three injury-causing avalanche accidents. according to the avalanche center. The first two occurred Dec. 13 at Pioneer Ridge and Hidden Canyon, both in the Salt Lake area.

Avalanche experts recommend that skiers, snowmobilers and snowboarders learn about the dangers of slides before hitting the slopes. They also recommend carrying safety gear such as beacons, probes, shovels and a lightweight backpack. Most avalanche victims have only 15 minutes to live after being buried in snow, according to the avalanche center.