The group skinned to top of Meadow Chutes, in Silver Fork, and skied 2 laps on the upper, lower angel slopes. The third time down was their last, so at the bottom of the upper slopes, they continued down and slightly left, stopping above a large, open convex slope. During this time they had seen no recent avalanches on similar slopes, saw any cracking, or heard any collapses.

Ricardo went first, telling other 2 to stay to the right of his tracks when they skied. Ricardo disappeared over the break over after 5 turns. A few seconds later, Joey and Sarah felt and heard a large collapse (whoomph). Then saw a powder cloud and debris running up the opposite side of the valley below. Joey immediately stated, “That’s him. We gotta go.”

Rescue: Joey and Sarah moved down the ridge to where they could survey the whole scene. Sarah made a kick turn and traversed into the trees away from the break over and called 911. She then became the communications coordinator, talking with rescue crews and Solitude patrol. Joey safely got onto the bed surface, and began a preliminary search, also looking for clues. Down near the bottom, he got a signal, pin pointed Ricardo’s location, and probed. On the 8th probe, he got a strike and started digging.

About 4’ down, Joey hit Ricardo’s boot, and that was when Ian, a Wasatch Backcountry Rescue (WBR) member from the Solitude Ski Patrol arrived, within 17 minutes of the initial 911 call. Shortly after, two more Solitude patrollers arrived to help dig, and then more rescuers arrived. Ricardo was dug out in approximately 20 minutes.

Ricardo was buried about 4 feet deep, on his back, in a wide terrain trap formed by the valley bottom. He was not breathing, had no pulse, and there were signs of trauma from the long ride. Two aspens, one about 5” in diameter had to be sawed to get his body out of the hole. The body was evacuated by WBR and the SL Co Sheriffs. 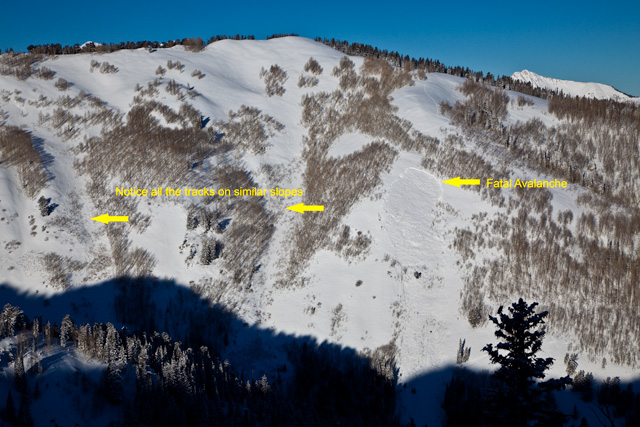 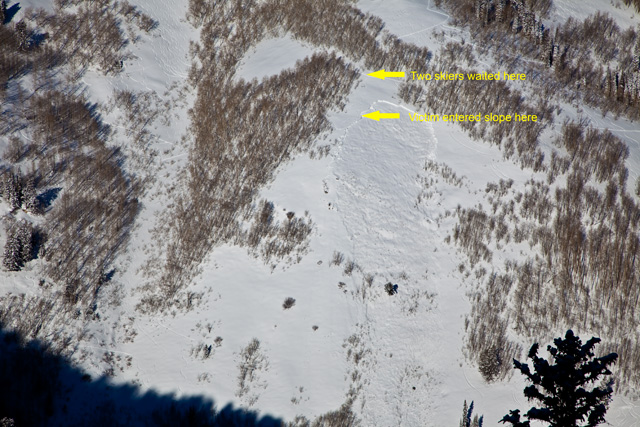 Joey Klein, the skier in the party who initiated the rescue, stands in the burial hole. The victim was buried about 4 feet deep, was face up and head toward the avalanche to the left. The avalanche crossed the creek and partway up the opposite side. Joey descended from the fracture and found the victim with his beacon, doing a textbook-perfect rescue. He dug for about 5 minutes before the Solitude Ski Patrol arrived and helped dig out the victim. They had to saw through some aspen trees buried in the debris to free the victim. 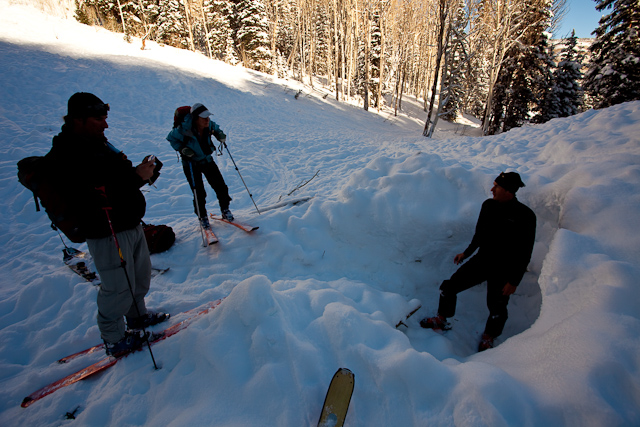 Looking up at the fracture with a zoom lens from the bottom. The victim triggered the avalanche by entering in the left third of the avalanche. As you notice, many bushes and rocks are sticking up, as the avalanche fractured on the very weak, faceted snow near the ground.