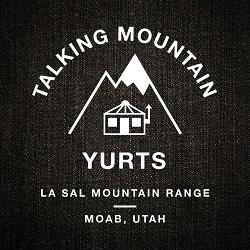 Years when the US averages 25 to 30 avalanche fatalities in a season, the particulars of each accident blur. However, in the winter of 2016-2017, when there were 12 avalanche fatalities, some interesting details stood out. One was the percentage of solo recreationists getting killed; the other was the relative number of people who were going uphill at the time of their accidents.

The risk of backcountry incidents and fatalities while descending is well known, and is often a main focus of avalanche training and education. However, the risk while proceeding uphill is less known. This study investigated the incidence of avalanche fatalities that occurred while backcountry tourers were ascending.

We analyzed data on avalanche fatalities (source: Avalanche.org) for winter seasons 2009-2010 through November 2017. We focused on the avalanche fatalities of backcountry tourers and recreationists who spent a significant portion of their trip going uphill, and excluded avalanche fatalities related to all other modes of travel (see Definitions). We then reviewed the subset of tourer data to determine if the tourers were proceeding uphill or downhill when the accidents happened.

We also defined a category called “Unknown”, which included backcountry tourers or recreationists for whom the available information was insufficient for determining whether they were ascending or descending at the time of the accident.

Of the 210 total fatalities from winter 2009-2010 through November 2017, we determined that 75 fatalities (36%) fit our criteria as backcountry tourers or recreationists who spent a significant part of their time going uphill. 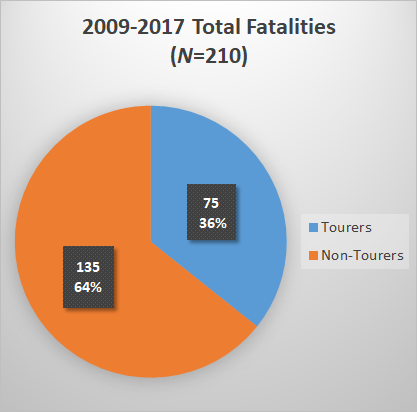 Of the 75 tourer fatalities, 24 (32%) were proceeding uphill, and 42 (56%) were going downhill at the time of the incident. The remaining 9 (12%) were classified as ‘unknown’ due to insufficient information to make a determination. Reasons for classifying an accident as “unknown” included lack of enough detailed information in the accident report to make a judgment, and lack of information in solo fatalities with no witnesses. Cornice accidents were particularly challenging to classify, when trying to determine if the accident “occured before descent.” Many of the cornice fatalities ended up in the “unknown” category. 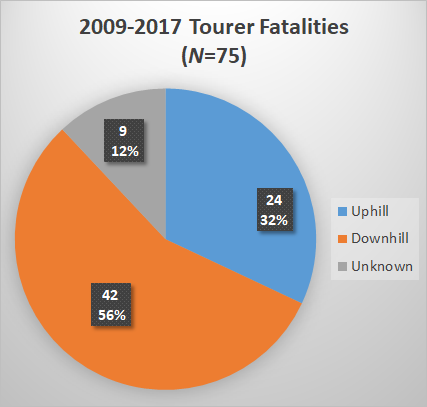 Great write up Evelyn - I know I am focusing on this issue more. I am also focusing on the decent and putting people in the right place, in case of a rescue. The talk you gave at the 2017 Utah Snow and Avalanche Workshop is weighing heavy on me. I don't want to effectively be traveling alone in the backcountry, even though I have partners. Good stuff here!
Trent Meisenheimer
Mon, 12/18/2017
Thanks for the write up. This is always a concern as often I see others above me taking lines I would question, wait, or even avoid if I saw another tour coming up. This often forces me to make route decisions farther out than I originally planned - causing significant delay to MY time going down hill. The question here: Is there yield given to the person going up, or coming down? In mountain biking it is the person going up that has right of way. Does something similar exist in back country touring? Cheers.
Andreas
Thu, 12/28/2017
Andreas, If there is any rule or accepted notion regarding this in bc travel it would be that yes, you do have to wait if you are above and you do not have the right to ski down on top of someone who is following your uptrack without their consent. This can be difficult in the last 15 years or so in the wasatch and there are places where there is a circular flow like Cardiac ridge (although the uptrack is on a slightly different aspect and a little off to the side), Cardiac bowl and the Monitors. The best approach is to put in a skin track that is well out of the way or that is as out of the way from any slide that you might create as possible. Even farther I would adjust where I am skiing in the more popular zones so as not to lead folks into an uptrack that will leave me stuck at the top waiting for others to finish their ascent. Also some of your travel and descent plans might need to change permanently based on the number of folks out in the bc. For example in the 80s and 90s we would ride Main Days Fork to the base, then skin back up Main Days veer to climber's right and ride the next drainage down canyon. From about 2002-2003, this practice became very unwise as there would be a stream of skiers descending on you who could not see you from above. While it is rare that I tour there anymore, these days I would ride the whole run and exit out of the runout well to the left into the timber without stopping since you are blind from above and there is commonly a stream of folks moving through the area and ascend again further down canyon for different runs.
Dave H.
Tue, 1/30/2018
Thanks. I will address this with my Back Country Ski class I teach here at BYU Idaho. In the Tetons unless you are out early after a storm you are often following existing up tracks (one of the heuristics) and don't give enough thought to potential danger. This has given me a lot to think about.
Scott Wood
Wed, 1/31/2018