Forecast for the Uintas Area Mountains

Issued by Craig Gordon for Thursday, March 24, 2022
Heads up... record warm temperatures are on tap and that'll make our snowpack cranky and reactive to our additional weight!
Today's very warm temperatures help activate weak layers of snow now buried 2'-3' below the snow surface and the avalanche danger rises to CONSIDERABLE as the day wares on. Human triggered avalanches become LIKELY, especially in steep terrain facing the north half of the compass near and above treeline. Any slide that breaks to older snow will pack a powerful, buzz-killing punch.
Lower elevation terrain right around our trailheads gets in on the act and you'll find MODERATE avalanche danger on steep, north facing slopes where human triggered avalanches are POSSIBLE.
A robust melt-freeze cycle creates solid snow on sunny slopes which keeps avalanche activity at bay. LOW avalanche danger and human triggered avalanches are UNLIKELY on slopes facing the south half of the compass.
Scroll to the bottom for a note on slope angle and how to have a blast without entering avalanche terrain. 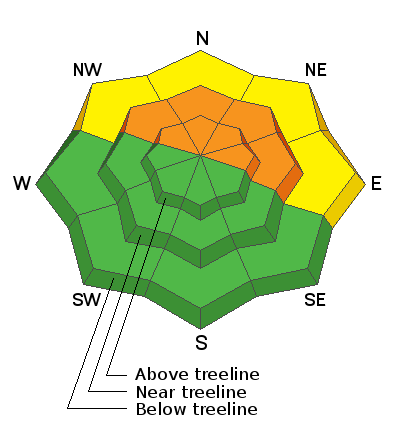 Please help support avalanche forecasting throughout Utah. For more deets about the Spring Campaign to help raise funds and support the forecasting you rely on simply click HERE.

NOWCAST-
Skies are clear and temperatures cooled somewhat overnight, currently registering in the upper 20's across the board. After a brief respite for dinner, northwest winds got back to work and began blowing in the mid 20's early this morning along the high ridges. Riding conditions are aspect and elevation dependent. Sunny slopes at mid elevations offer supportable snow and legit corn, whilst upper elevation north facing terrain still harbors cold snow. In between there's hot pow and not quite corn.... so ya gotta be on your snow game and once you've found your commodity... stick with it.
FORECAST-
Look for mostly sunny skies with highs rising into the low to mid 40's. West and northwest winds blowing in the 30's along the high ridges allow air to circulate through your pit-zips. Overnight lows hover right around freezing.
FUTURECAST-
Temperatures warm each day through at least Saturday, possibly through Sunday. Record high temperatures are likely for much of Utah through the weekend. Cooler conditions and better chances for precipitation are expected next week, although temperatures will be warm enough for snow levels to be around 8000 feet Monday. Cooler conditions are expected to drop snow levels Tuesday. 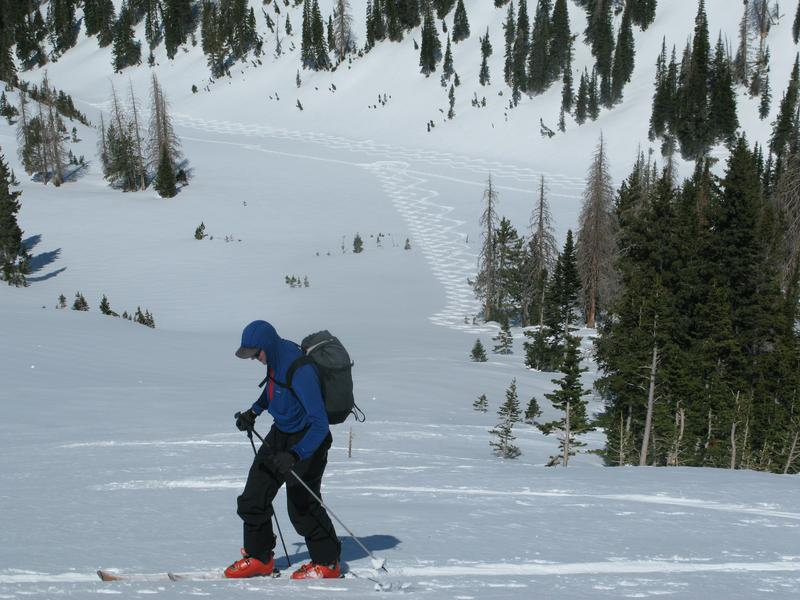 Time well spent with UAC alumni Bo Torrey sharing wisdom, stories, and overall great stoke yesterday whilst joining Andy Nasetta and I on the up and down track(s). What an honor to be surrounded by two solid snow-pros who give so much of themselves to their community by educating others and helping our collective backcountry family learn how to safely enjoy this amazing place we live and recreate in. Nice work men... rock on!
Trip reports and snowpack observations are found HERE.
Looking for real-time temps, snow, or wind? Click HERE and then on the "western Uinta" tab for western Uinta specific, weather station network. 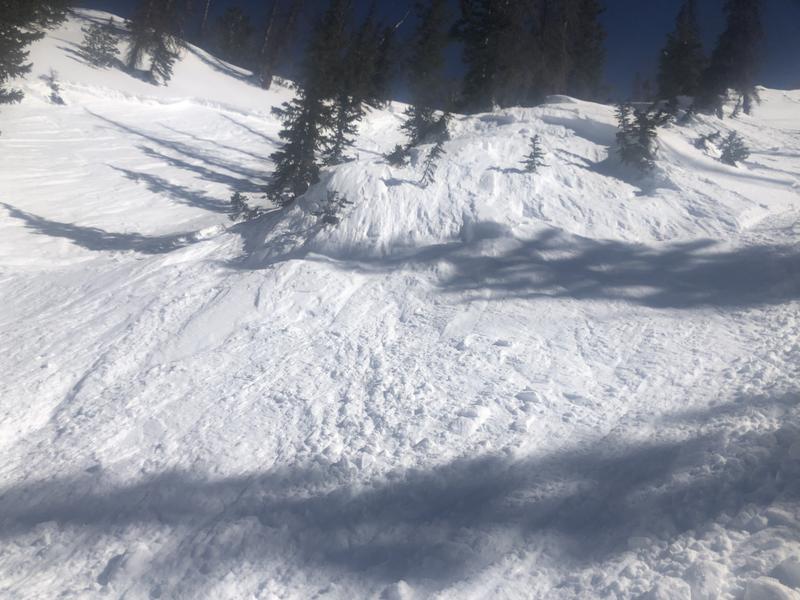 Late Wednesday a rider triggered this pockety slab on a steep, north facing slope in Upper Chalk Creek. Not particularly huge... just big enough to ruin your day.
Spring happens fast in these parts and of course, the snowpack is keenly aware of these macro and micro changes. In fact, the snowpack continues producing avalanches that break to our problem child, a persistent weak layer (PWL)... and the slides are packing a punch and piling up a healthy dose of debris.

Your input is vital and we're interested in what you're seeing. Please contribute to this great community resource and go here to fill out an observation. 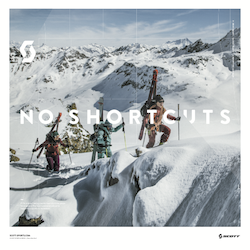 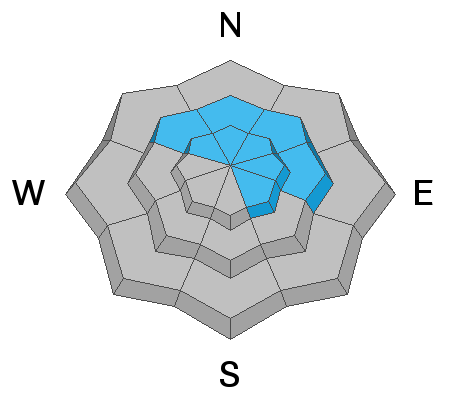 Andy and I stomped around the North Slope Monday and the viddy above illustrates our problem child, a persistent weak layer (PWL) now buried and preserved underneath about 2 feet of snow.
Longtime guide and backcountry peak bagger extraordinaire John Mletschnig was in Millcreek recently and states... "We had numerous, booming collapses with shooting cracks 50-100' in all directions on NW-N-NE-E aspects between 9500-10500' from 3/20-3/22 near Boundary Creek Yurt. All failures were on the Buried Near Surface Facet layer down 40-60cm from the surface. In all we probably had ~20 large collapses in our travels." Adding... "In sheltered locations this seems to be most prominent. By no means would I trust anything over 30° NW-N-E. I think I can say with confidence we observed Considerable danger in our travels. In the coming days the warm temps will certainly help in the long run. In the short term, all bets are off."
Here's the setup-
We know we have stronger snow on a deceptively tricky, weak layer of snow (PWL) and that creates a suspect snow structure. In fact, it's this combo that's lead to the recent string of human triggered avalanches. Now here's where the tricky gets even trickier. Today's strong sunshine and decreased winds might help to bring the PWL out of its dormancy and back to life, further complicating the avalanche equation. Yes... there's a lot going on, so let's keep it simple.
There's a weak layer, it hasn't gone away, and we're seeing the biggest sign of unstable snow... avalanches! But, it's not like there are slides everywhere and place is coming unglued. However, in addition to recent avalanche activity there are also plenty of other red flags like collapsing and shooting cracks. So the safest approach is to assume the PWL is present on shady slopes and remains guilty until proven otherwise.
Where does this weak layer exists? The bullseye locations are basically all slopes with dry powder near and slightly below treeline today. Above treeline, the PWL is not as uniform and a little more pockety in distribution. The scary part about this situation is that this layer and it's ability to produce avalanches is variable.
How to avoid it? There are two options. (1) Ride south facing slopes where this layer doesn't exist but the riding conditions are variable. Or, (2) ride northerly facing slopes with dry powder but avoid being on or under any slopes steeper than 30 degrees.

AVALANCHE TERRAIN:
Slope angle determines where avalanches can happen and where they can't. Generally, any slope steeper than 30 degrees is where avalanches occur. This means all you need to do is ride slopes less than 30 degrees in steepness and you'll never have to deal with avalanches.
There's a catch! You can't be underneath slopes steeper than 30 degrees either, even if you're on a flat slope, because avalanches can crash down on you. It turns out that skiing or riding slopes about 25 degrees in steepness is really fun and even more fun because there's no worry of avalanches. Unfortunately, it takes a lot of practice to estimate slope angles with your eyes alone. The way to get practice and the only way to know for sure is to measure slope angles with slope measuring tool shown in the photo below, and Toby describes it in this video. There are also many apps so that you can use your phone in a similar manner. 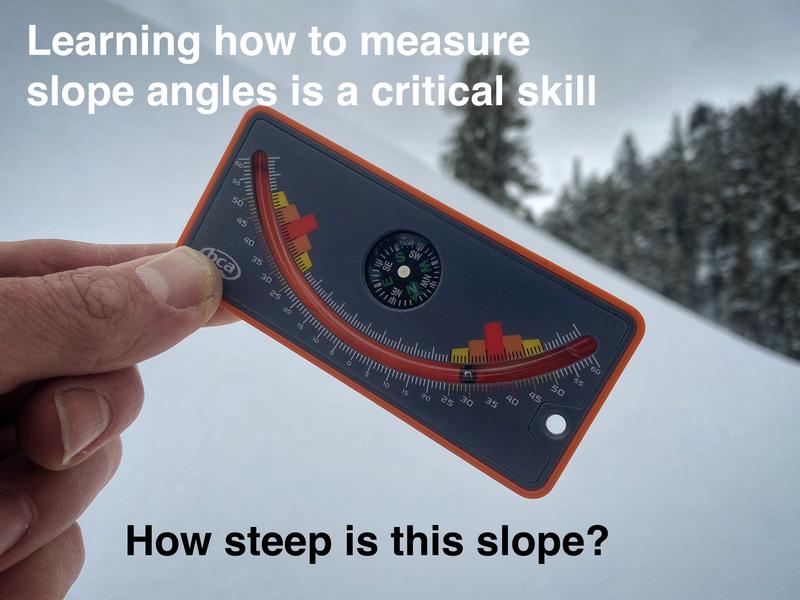 Your observations are important, so please let me know what you're seeing... click HERE and contribute to this amazing community based program

The information in this forecast expires 24 hours after the day and time posted, but will be updated by 07:00 Friday, March 25th.
Before it gets too crazy, now is the time to book an avalanche awareness presentation for your group, club, or posse. You can reach me directly at 801-231-2170 or [email protected]
This forecast is from the U.S.D.A. Forest Service, which is solely responsible for its content. This forecast describes general avalanche conditions and local variations always occur.