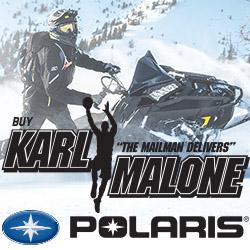 Blog: Where Are We Going?

On the morning of January 29th, Alta Ski Area embarked on a helicopter-based avalanche stability testing mission. As a part of these missions an aerial sweep is conducted to clear the area of any people. During this sweep three people were spotted skinning up the East Castle within the Alta Ski Area boundary. Helicopter operations were halted until the area was cleared of people.

Backcountry users touring within the ski area boundary has become more frequent in recent years. We are often forced to halt operations due to the presence of tourers in the areas in which avalanche work is in progress.

This unpermmitted use is not only punishable by law, but more importantly inherently dangerous. The consequences should a skier be involved in either an artificially triggered avalanche event or explosive accident would be catastrophic for the entire Wasatch skiing community.

Below is the story of the three-people involved in the incident on January29th. We thank them for sharing their story and hope that this can be a learning experience for all other members of the Wasatch skiing community.

Photo of the East Castle area where this incident occurred. The black line shows the approximate location of a natural avalanche that happened on November 18, 2017.

Where Are We Going?

"Where are we going?" asks my wife. This can sometimes be a loaded question, especially when it comes to eating, but not this time. I did my homework. "You know that sweet looking north-facing line east of the castle we always look at from the top of Emma Ridge?" "Yeah." "That's where," I say confidently. A few texts back and forth with our third party and our time is set for 5:30 am at the park and ride.

By 6:15 am we were skinning up the Summer Road in Little Cottonwood Canyon and preparing for a nice sunrise and hopefully some good turns.

If you read "that sweet looking north-facing line east of the castle" and thought, "right on", then you really need to keep reading. 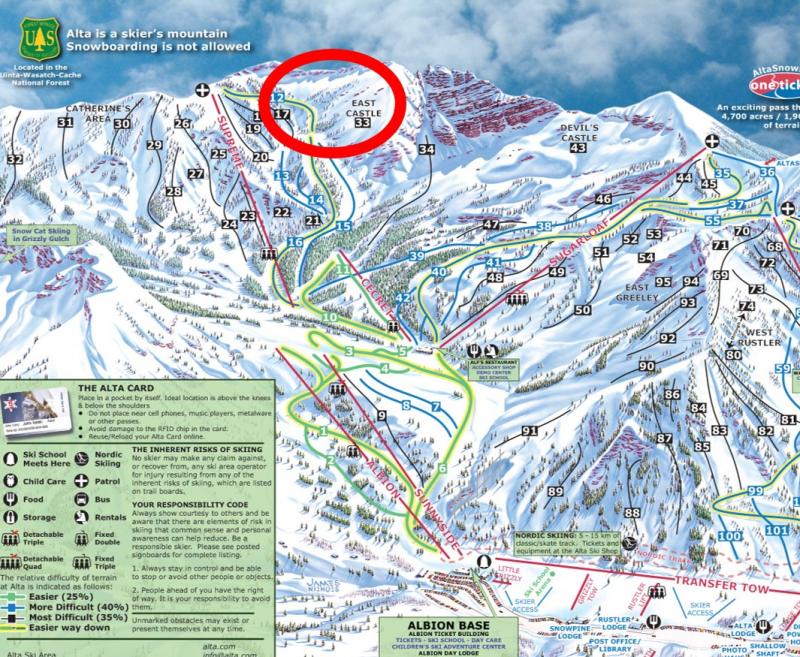 By eight-ish we were to the toe of the slope we wanted to ski, and we were all thinking, “wow, this is really close to Alta's Supreme lift” (red flag #1). "I wonder why nobody's hiked up to ski this line yet- even a couple days after the storm?" (red flag #2, this is Wasangeles after all). "Well let's just head up through these trees so we can see what each side of the ridge looks like and pick the best line down."

At no time did any of the three of us really question where we were. We were evaluating avalanche conditions with pole probes and small hand pits, but we certainly didn't realize we were still within Alta's boundary. Our intent was to dig a snow pit when we found a good spot but instead we saw the helicopter full of avalanche workers flagging us down and realized we had made a huge mistake.

We lucked out big time as the helicopter and crew made a pass over us, spotted us, and told us to get down. We stopped our ascent immediately, transitioned, and skied our normal one-at-a-time descent procedure that we usually use while backcountry skiing. We found out later our "quick decent" was 19 minutes after being hailed by the helicopter crew. Had the crew not seen us in their fly by, they could have easily dropped charges onto the same slope we were on and things could have got ugly real fast-- I hate to think you might be reading our obituaries instead of this blog post.

We messed up. Big time. And it was completely our fault for not doing our homework. I thought I had, but I did not do enough. We had not even considered the potential risk that we had placed on not only ourselves but also that of the avalanche workers trying to perform their jobs within the ski resort.

"Know Before You Go" isn't just about knowing the avalanche danger, current conditions, exit strategy or emergency numbers in case things go wrong. It's much more than that. It's knowing where you are headed if that area is closed for avalanche work, or a permanently closed area in a resort or private property. These areas aren't closed without reason. They are closed due to avalanche danger and/or planned avalanche work. It's for our safety and the safety of those who work and recreate in and around those areas.

The ignorance on our part, and others, is causing tremendous stress for the resorts and people who own and operate these areas. If we aren't more informed and respectful of these boundaries, the privilege of skiing in some areas could be taken away.

It's up to us, as backcountry users, to be informed of all closures, and (obviously) ski area boundaries.

I really hope anyone who reads this can pass along this info. There are steep fines (and possible jail time) for those who break these rules. But the bigger picture here is not limited to the individuals who break these rules, it's the consequence for the people working in the area and the other users in the backcountry who may have their access jeopardized. In short, ignorance is NOT bliss.

The Cottonwood Canyons are busy places with complex mixes of public and private land, and it can be confusing. We are very fortunate to have such incredible access to an amazing playground. Here are a few resources to help.

Uphill Travel Policies for each ski area are posted HERE.

These interactive maps from UDOT available at the link above are useful for showing closures in the backcounry when UDOT does avalanche mitigation work above highways. Click on each map to go to the full interactive version. Read more about how, why, and when UDOT uses backcountry closures in this document.