We still have not talked directly to the witness so we are missing some information on the accident. What we do know is that two people left the Snowbasin ski area Saturday, March 11th and headed into Taylor Canyon. Both of them were snowboarding and neither of them had avalanche rescue equipment. At around 3 pm one or both of them triggered an avalanche that caught one of them and buried him. It broke about 15’ above them. The person that was not caught searched for about an hour starting in some trees just down the slope from the fracture line which was the last place he saw the victim. The witness continued down the avalanche path with no luck locating the victim then continued out the drainage into Ogden where he alerted authorities. A helicopter was dispatched to survey the area and avalanche workers were able to locate the avalanche along with a few others that had run as well. Time was too short late in the day to dispatch an initial response team so the search was called off until morning.

Efforts were organized early Sunday morning but weather did not permit a snow safety team to do control work on slopes that had the potential to avalanche onto the area where the search party would be. Lees and Kobernik along with G.R. of the Snowbasin patrol attempted to travel to the fracture line. Unstable snow and very radical terrain kept them from doing this safely so the mission was aborted. Some clearing was taking place by late Sunday and avalanche control work was performed. Explosives did produce avalanching that covered the initial debris pile. The initial search party was dispatched but unable to locate the victim. The Weber County Sheriff had closed the Taylor Canyon access from Snowbasin until the search is done so that potential skiers above the rescue party don’t put them in danger. On Sunday the witness was questioned by the search teams and it was determined to conduct a search in the trees near the starting zone which was the last place the victim was seen. This was not done the night before because lack of time. Dogs immediately picked up the scent and the victim was found about 150’ below the fracture line where he was hung up on a tree. It appears he was slammed into a tree and died of trauma. 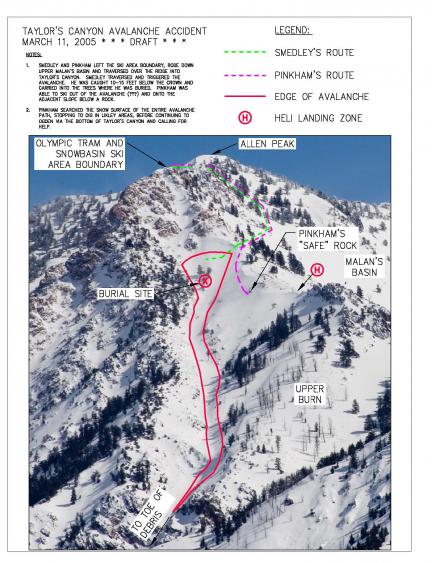 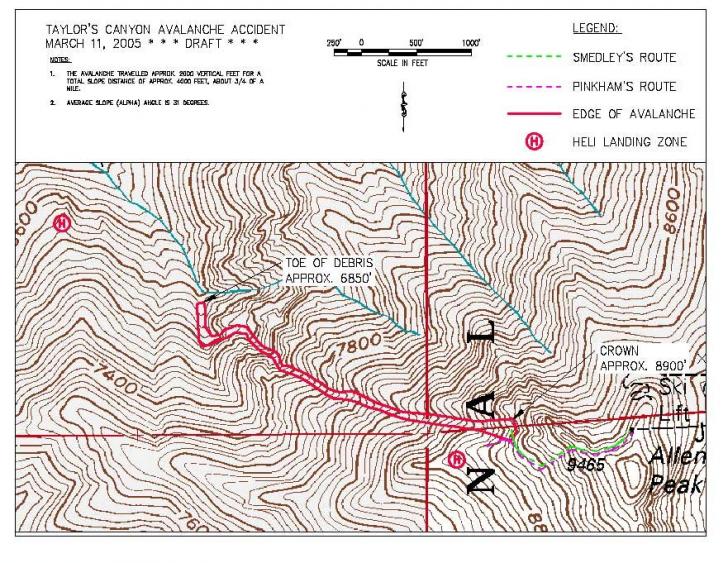 A copy of the Utah Avalanche Center’s daily advisory is regularly posted at the access gate to Taylor Canyon. That day it warned of fresh wind slabs and not to be surprised if you trigger an avalanche. It is not known at this time if the victims consulted the advisory. Many people consider backcountry terrain adjacent to ski resorts to be an extension of the ski resort with the same dangers as within the area boundary. Often, they ski in this terrain regularly and take for granted that the snowpack receives no avalanche control work and does not see the same amount of skier compaction as within the ski area. Since they are familiar with this terrain, it is difficult for them to pass it up when there is fresh snow to ski. However, this terrain has a backcountry snowpack where new weakness and persistent weakness can exist even though it is so close to the resort.