On Thursday March 31st a group of five snowmobilers left the Monte Cristo trailhead, located near Ogden, Utah, for a day of snowmobiling. The terrain is relatively benign and is an area many locals go to when there is an avalanche danger on nearby steep, climbing hills. The group was very familiar with the terrain and was thinking about the avalanche conditions, and they were all wearing beacons, shovels, and probes. Four of the riders stopped on top of a slope just to the south of “Whiskey Hill”. The fifth sledder and avalanche victim passed by them, and much to everyone’s surprise began descending a steep adjacent slope to the south, named Eccles Peak. The snowmobiler was only about 20’ onto the slope when he propagated a large avalanche.

One of the members of the party drove to the top of the slope, got off his machine and ran down the bed surface while the rest of the party approached from the bottom of the slope. Within a matter of minutes the fellow descending the slope pinpointed the victim in a tight group of trees and within 7 or 8 minutes the party had the victim dug out. He wasn’t conscious or breathing and

. was performed. At approx. 10:51 a cell phone call was made to 911 and both the Rich County Sheriff and Life Flight responded. While a coroners report was not yet available, it seems that massive chest trauma was the cause of death. 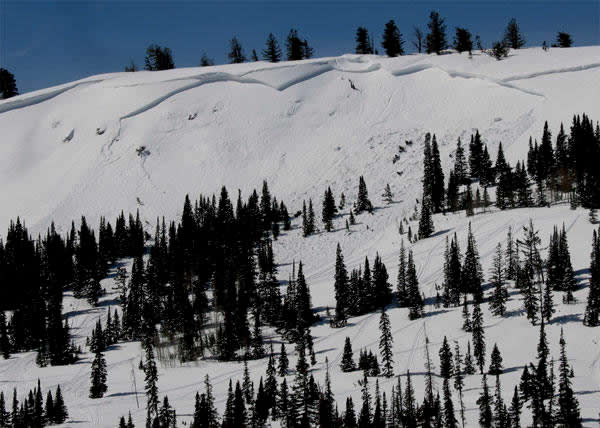 Tragically, a 27 year-old snowmobiler from Farr West died after triggering this avalanche on the last day of March. He is the 8th person to die in an avalanche in the Utah backcountry this season.

The deadly avalanche occurred on a steep wind-drifted slope just south of the slope known as "Whiskey Hill." "Whiskey Hill" is on Eccles Peak off the snow-covered Curtis Creek Road, and because hwy 39 is closed in the winter, it is accessible for snowmobilers from either Monte Cristo trail-head (west side near Huntsville and east side near Woodruff).

The slope that avalanched is just a little steeper than Whiskey Hill, (the tracked slope on the right or to the north). It faces just a little more north, it's shallower and it may have picked up a bit more wind-deposited snow. 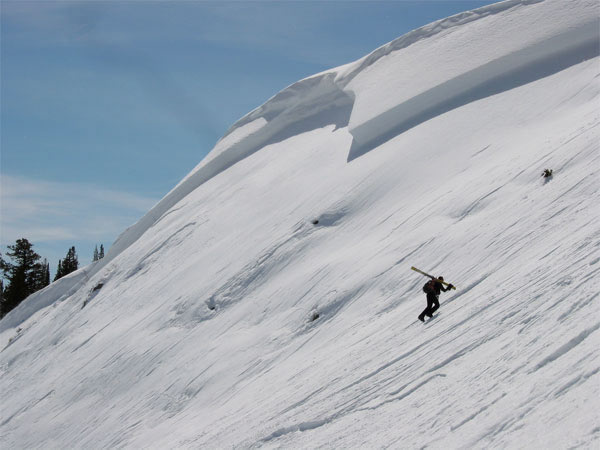 The hard slab avalanche was over 500 feet wide and averaged 4 feet deep at the crown. The short slope is very steep ( 38 to 45 degrees in slope steepness).

Utah Avalanche Center forecaster, Craig Gordon, has to kick his boot toes into the solid bed-surface in route to the crown. 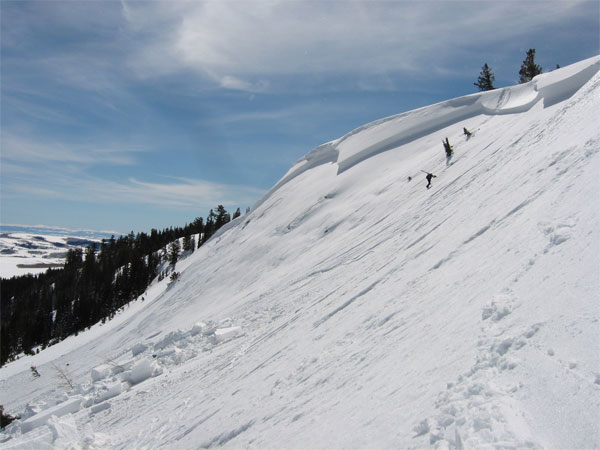 The northeast facing slope at just under 9000' in elevation is a classic avalanche trap. Prevailing winds drift tons of snow from a large open flat area to the west of the slope and deposit it here as they decelerate. It is a perfect lee-slope fetch area. 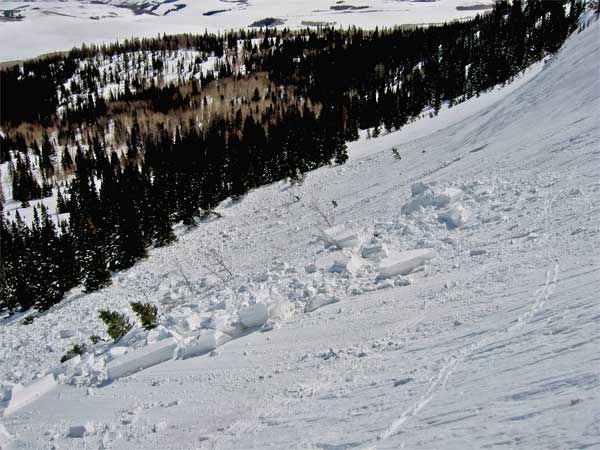 To make matters worse, snow sliding off this slope runs smack into, and then strains through a wall of mature conifers. The unlucky snowmobiler probably died from massive trauma inflicted by the trees as he was pushed through them by the avalanche. 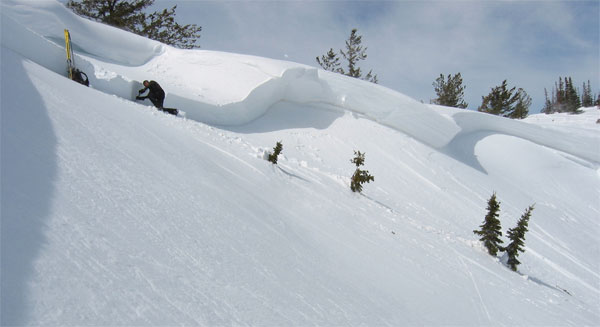 Craig Gordon examines the mechanical properties of the avalanche by digging above the crown. Up there he can test snow that is undisturbed by the avalanche. It's important for us to look at avalanches. We compare what we find in the crown profile of the avalanche path to the snow profiles of slopes in the region that haven't avalanched. Is there a similar combination of a stiff slab and a thin sugary weak layer? If so, we must suspect that other human triggered avalanches are possible. 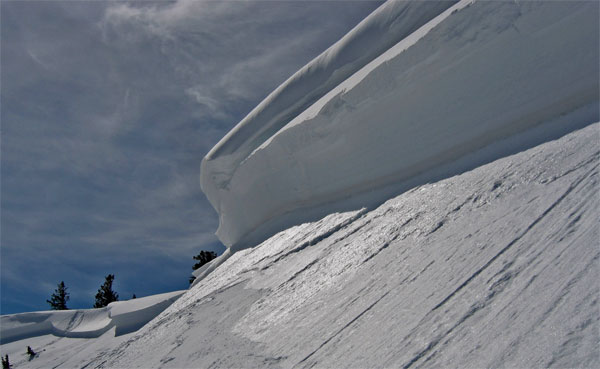 The stiff wind-deposited slab failed on a thin sugary or faceted layer capped by a dirty wind-crust in early March. The rest of the solid slab consists of snow deposited in the last 2 big March storms (3/20-2/23 and 3/28-3/30). 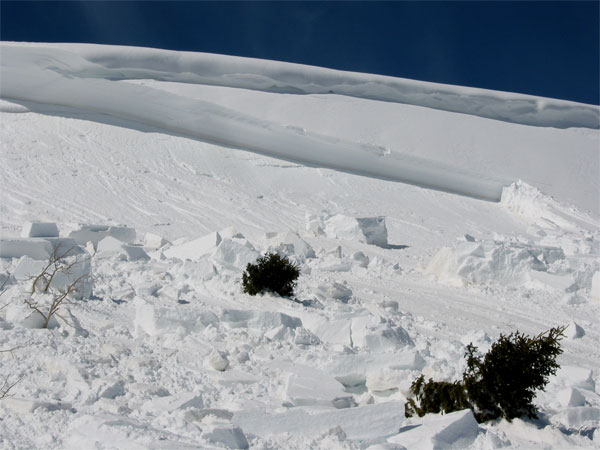 The cornice above shows us that wind deposited snow builds up on the slope below. Prevailing winds scour snow off an expansive flat open ridge-top and can rapidly deposit tons of snow onto this steep northeast facing slope.

A single track descending into the middle of the avalanche tells the story. A snowmobiler rode past his party and down the steep slope. The avalanche released when he was about 20' into it, right at a steep rocky roll-over where the remaining snow is shallow and weak. The track enters the slide path in the center, and the slab pulled out a couple hundred feet on either side. 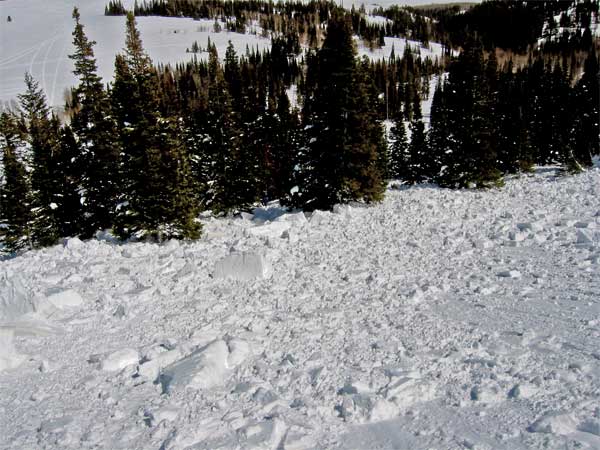 He might have been able to ride out the avalanche if it were on an open slope, but instead he was driven into an unforgiving grove. These trees are directly in the fall-line below the tracks leading into the avalanche. 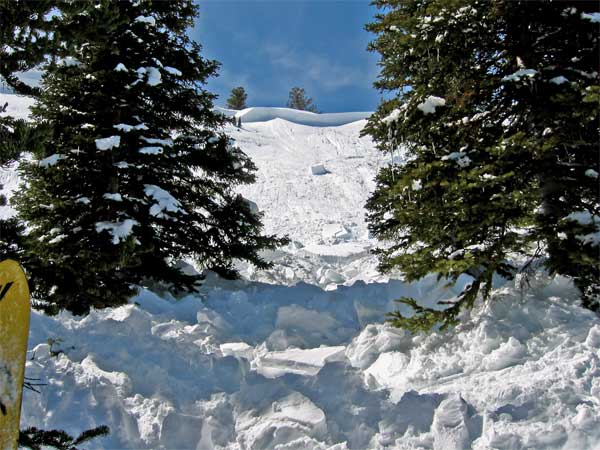 Tons of snow strained through the trees and piled up deeply around them. This is looking up at the crown from near the burial site. 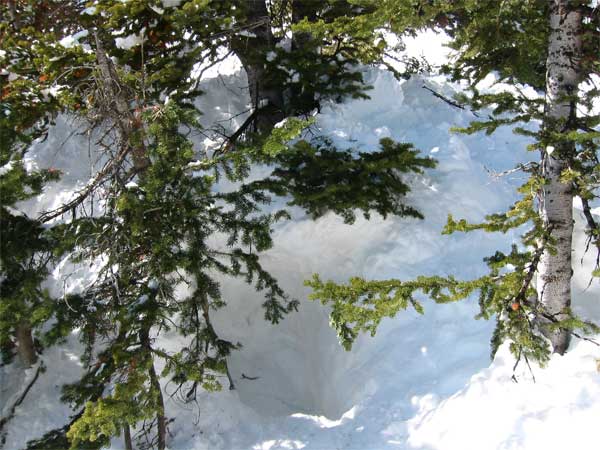 Here is the burial site in a large pile of snow on the downhill side of these trees. Given the situation, the rider was found quickly by his party who were all equipped with beacons, probes and shovels. Even so, he died, most likely as a result of trauma. Statistics show that at least a quarter (or 25%) of avalanche fatalities can be blamed on trauma. Many die before the avalanche even stops.